On Monday, five of the fraternity brothers accused of being involved in the death of Andrew Coffey, a 20-year-old Florida State University student, pleaded guilty to two counts of misdemeanor hazing.

Four of the men will each spend 60 days in jail for their part in the death of Andrew Coffey. Because one cooperated with investigators, he will only spend 30 days in jail; he has already spent 20 days in Leon County jail. In addition, they will be on probation for two years.

All five are also required to speak publicly about hazing when asked and write a letter of apology to the Coffey family. This is a stark contrast to the original five years in prison they would have faced had they been convicted of the original charges, which were for felony hazing.

For the five other defendants, trial is set for June. They face third-degree felony hazing charges.

Understanding What Happened to Andrew Coffey

On November 2, 2017, Andrew Coffey, a native of the Pompano Beach area, attended a Pi Kappa Phi event known as “Big Brother night.” As part of the long-standing tradition, he consumed the “family bottle” of bourbon given to him by his Big Brother. The next morning, he was found unresponsive. In the autopsy that followed his death, his blood alcohol level was found to be six times the legal limit.

In the aftermath of Coffey’s death, his family has been left to pick up the pieces.

With our law firm’s help, they have filed a civil lawsuit against the nine fraternity members who have been charged in the death of their son, along with the national offices of Pi Kappa Phi, the former adviser of the Florida State University chapter, and the individuals who rented the house where Coffey passed away. Coffey’s family have also joined together with other families impacted by fraternity hazing around the country to form PUSH (Parents United to Stop Hazing).

“Our world has been rocked by this,” said Sandy Coffey in court. “There is not any normal for us; time will not heal our wounds. We are completely devastated by his death and the way in which he died. Last year, four young men died pledging a fraternity. Fraternity hazings need to stop.”

To learn more about this latest development, read the recent Tallahassee Democrat article.

You can also listen to Attorney David Bianchi speak about this case here: 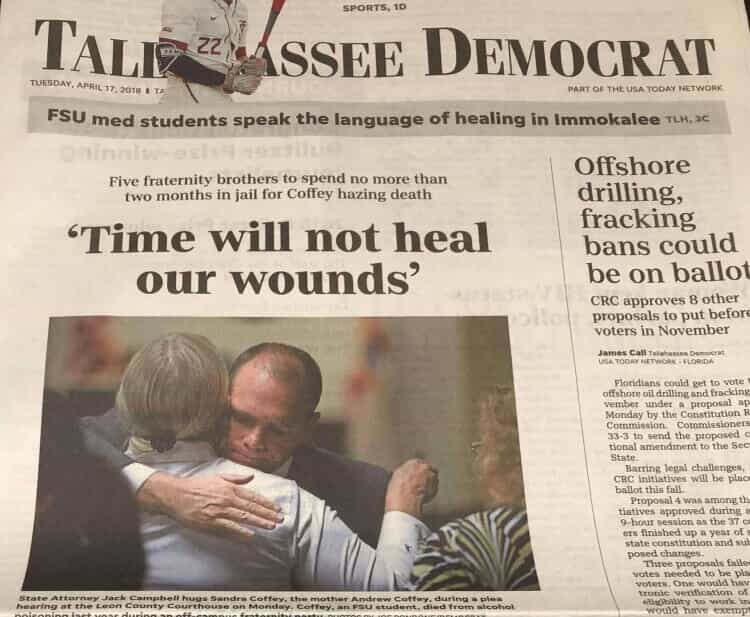