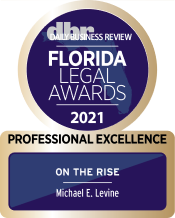 Michael’s practice also involves the representation of families of those who died or were severely injured as a result of dangerous fraternity hazing incidents. In 2019, along with David Bianchi, Michael drafted a bill to help strengthen Florida’s Anti-Hazing law. The bill, which was signed into law in June of 2019, is named “Andrew’s Law,” after Andrew Coffey, an FSU student who died in November 2017 during a fraternity hazing tradition. Michael and David represented Andrew’s parents in a civil suit against the national fraternity and 14 other defendants.

In 2018, the Cystic Fibrosis Foundation honored Michael as one of the Top 40 under 40 South Florida Lawyers. In 2019 and 2020, Michael was named by Super Lawyers as a Rising Star, and in 2019 was also recognized as a Top Up & Comer by South Florida Legal Guide in catastrophic injury and wrongful death.

In his free time, Michael enjoys spending time with his wife Sari, son Cameron, and friends and family.

Michael also writes and speaks on topics relevant to his practice. His articles include:

scroll
Send Me A Message

We Don't Just Talk About Results. We Get Them.

Stewart Tilghman Fox Bianchi & Cain, P.A. won a record verdict for a 77-year-old stroke victim who lost the use of the left side of her body due to the negligence of her doctors. Despite being at a higher risk for blood clots and strokes, her cardiologist and electrophysiologist (a heart rhythm specialist) took her off Coumadin—a medication designed for preventing blood clots and strokes. The defendants argued that the patient didn’t deserve a large verdict due to her advanced age and lower life expectancy. The jury saw through their cynical arguments and awarded our client nearly $8 million—the most damages awarded to a malpractice victim over the age of 70 in Florida history.