Hazing isn't limited to Greek life, but fraternity hazing is what most people visualize when they think of the word "hazing"—and in many ways, it typifies everything tragic and infuriating about it. All hazing relies on some form of coercion, but fraternity hazing preys specifically on a person's need to belong. Many fraternity hazing deaths happen to "pledges," or people who are working to earn their way into the tribe. The way they usually earn it is through acts of "courage" (read: acts of humiliation, exposure, alcohol abuse, and submission to a senior member of the fraternity).

Fraternity hazing is more insidious than general hazing for another reason: few people see it for what it is.

College authorities and parents do nothing because it's one of the only culturally-accepted forms of bullying. If a coach was forcing would-be athletes to drink excessively to get onto the team, he'd be recognized for the predator that he is. But when put in the context of a fraternity, of brotherhood, then that same abusive coercion becomes "character-building" and "tradition." These are the words used to shield fraternity hazing from a cultural reckoning—or at least, it was. Now parents are seeing fraternity hazing for what it is: a wasteful, tragic, and utterly needless component of college life.

The Long-Term Consequences of Fraternity Hazing

The news only reports the worst hazing cases, but hazing harms thousands of students on an annual basis. Hazing doesn’t only cause physical harm or fatal injury; in many cases, hazing also causes invisible injuries that are mental, emotional, or social in nature.

Attorney David Bianchi testified before the Florida Senate Criminal Justice committee in March 2019 to propose amendments to the Chad Meredith Act. The proposals included granting immunity to the first person to call 911 on behalf of a hazing victim (provided they cooperate), prosecuting hazing suspects for causing permanent injury, and holding the organizers and recruiters behind hazing events criminally liable. As one of the architects of the Chad Meredith Act, Mr. Bianchi knows well what the victims of hazing need to hold wrongful actors accountable. In his words, these proposals help make a “good law even better.” Their testimony convinced the committee to approve the proposals, bringing it one step closer to becoming law.

In April 2019, only weeks after Mr. Bianchi's original testimony, the Florida Legislature unanimously passed the amendments proposed by David Bianchi and the Coffey family. Lawmakers also voted to change the name of the bill to "Andrew's Law" and sent the bill to the governor for signing. The law was named for Andrew Coffey, an FSU student who died during a Pi Kappa Phi tradition where he was told to drink an entire bottle of Wild Turkey bourbon. When fraternity members found him, they spent 11 minutes texting one another before they called an ambulance. By then, it was too late. The provision granting immunity to the student who calls 911 first is a response to his story.

Andrew's Law was also drafted in response to the story of Nicholas Mauricio, another FSU student who was left permanently brain damaged during a violent hazing tradition called "Scumbag of the Week." While Nicholas' 'brothers' brought him to the hospital, their answers in response to police questioning led a grand jury to believe fraternity leaders had scripted everyone's answers. Granting immunity to the first person to cooperate with the investigation would break through the culture of secrecy that protects wrongdoers.

Mr. Bianchi, who represented both Nicholas and the Coffey family in civil suits against the fraternities and their leaders, wrote Andrew's Law to make sure that Andrew's death and Nicholas' injury would never be repeated. We're proud of our lawmakers for recognizing the necessity of this legislation. 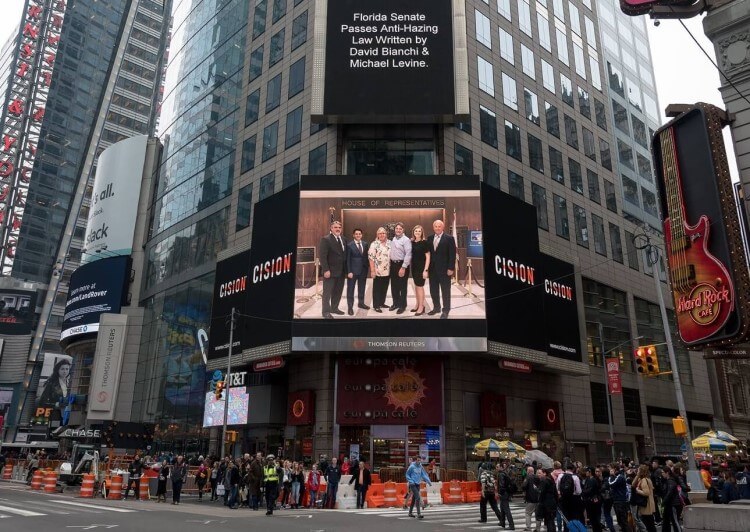 Andrew Coffey fell victim to alcohol poisoning on the couch, surrounded by oblivious, reckless fraternity members and fellow pledges. Even when they found him unresponsive, the fraternity brothers debated for 11 minutes about whether calling 911 would get them in trouble. In 2020, his parents Tom and Sandra Coffey released an anti-hazing pamphlet to prevent Andrew's tragedy from repeating elsewhere. The pamphlet arms students with the symptoms of alcohol poisoning and the telltale signs of fraternity hazing.

What Is Fraternity Hazing?

Hazing is a form of social conditioning used to coerce, abuse, and humiliate young people into putting themselves at tremendous, meaningless risk. Fraternities use it to weaponize our deepest desire: our need for community. By turning initiates into puppets, modern fraternities subvert and mock the 'values' their organizations stand for.

Contrary to what fraternities or clubs will say, hazing does not develop unity. What it develops is a lever of control and a hierarchy of power within the organization. Hazing victims often haze new members or pledges because they want to feel the same power that was exerted on them. The abuse creates a vicious cycle. That’s why half of college students involved in clubs, sports, or organizations (of all genders) reported experiencing hazing at some point.

Should I Report Hazing to a Fraternity Hazing Lawyer?

In the moment, peer pressure and membership expectations make it difficult to identify your shame, embarrassment, or physical risk for what it is. It’s not uncommon for students to undergo hazing, only to realize after the fact that they were the victim of organized, targeted abuse. Even then, students are reluctant to report it because of the shame and anxiety that comes with hazing.

Speak with our fraternity hazing lawyers in a free and confidential consultation. We can help you understand if what you experienced was fraternity hazing, and whether your fraternity can be held accountable. Our team has won the most notable hazing cases in the nation, so call us today to get answers.

What Should I Look for in a Fraternity Hazing Lawyer?

Fraternities and universities are exceptionally well-prepared when it comes to litigation. If you’re looking for justice from an institution of that size and scope, you’ll need an attorney who is not only an excellent litigator, but has had previous success handling hazing cases nationwide. Attorneys David Bianchi and Michael Levine at Stewart Tilghman Fox Bianchi & Cain, P.A have been instrumental in some of the greatest hazing victories nationwide.

In 2005, our firm won the single largest hazing verdict in history for the family of Chad Meredith. Our own David Bianchi was the architect of Florida’s anti-hazing statute, the Chad Meredith Act, which was the first law in the state to make hazing a felony. In 2019, David and Michael drafted and helped pass Andrew’s Law, an amendment to the Chad Meredith Act that anti-hazing advocates have called innovative and groundbreaking. We have continued to represent numerous victims of fraternity hazing, including Andrew Coffey (for whom Andrew’s Law was named), Antonio Tsialas, and others.

Our firm has won massive victories for the families of hazing victims with both trial results and legislation. As the foremost authorities on hazing representation in the nation, we’re the firm victims call when they need realanswers. Speak with us today in a free consultation.

Giving Our Youth a Voice Against Abuse & Coercion

Hazing is a heinous, widespread form of abuse that few people can identify and even fewer people have spoken out against. See if you can note a pattern in the deaths of the young people below—all of whom were 18-20 when they died.

Our hazing lawyers won't allow hazing to go unpunished—we won't allow the harm of our children at the hands of 'clubs' sanctioned by universities looking the other way. Our firm is responsible for the largest single verdict ever awarded in a hazing case—a verdict that helped bring justice to the death of Chad Meredith. The fraternity hazing lawyers at our Miami personal injury law firm are responsible for helping the Coffey family find justice in the wake of his death.

If your child was harmed or killed by fraternity hazing, speak with our attorneys to learn what you can do, how you can hold negligent fraternity leaders accountable for your loss.

Results. Hundreds of Millions Recovered For Our Clients