This week, our firm received an unexpected gift: commemorative crystals from the Coffey family addressed to Attorney David Bianchi and Attorney Michael Levine, who represented the family after FSU student Andrew Coffey was killed in a fraternity hazing tradition planned by Pi Kappa Phi. After the young man's tragic death, we represented the family in a civil action against Pi Kappa Phi and its leaders.

However, our partnership did not end there. After the trial, the Coffey family and our firm joined resources to compel lawmakers to strengthen our current anti-hazing statute (also known as the Chad Meredith Act). Our goal was to ensure what happened to Andrew would never happen again.

Our amendments to the Chad Meredith Act, later titled by lawmakers "Andrew's Law," were signed into law last month after weeks of unanimous support in both chambers of the Florida legislature. Read here to learn more about what the law did to make college students safer.

Your dedication to protect the lives of young people from reckless hazing traditions will be recognized forever.

Your commitment to create positive change inspires us all to be better. 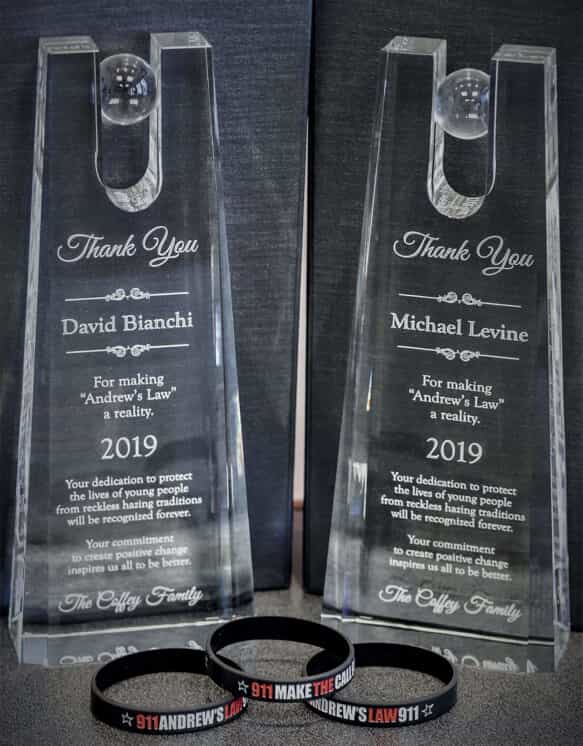 The Debt We Owe to Tom & Sandra Coffey

Losing a loved one is indescribably painful. Grief and loss can leave lifelong wounds, and in many ways, grieving families never go back to 'normal.' Instead, they spend years finding a new normal.

The Coffey family could have easily retreated into private life forever after their lawsuit against Pi Kappa Phi, and they had every right to. Instead, they put aside their own needs to ensure the safety of college students who might be subjected to the same treatment as their son. They became advocates for children they would never meet, for generations to come.

As professional advocates, we find their selflessness, their courage, and their "commitment to create positive change" truly inspiring. From the bottom of our hearts, Tom and Sandy, thank you for your persistence and commitment to a better future. It was an honor working with you to make Andrew's Law a reality.